Hey. So I haven’t written anything in a while but quite a lot has changed. I’ll update everything soonish but for now just have the latest in what’s going on.

I’m writing to you from the comfort of home here in grey rainy Brum, as I get ready for three weeks of planes, trains, coaches and concert halls.

So anyway I’m one of the newest additions to the CBSO family (or madhouse?!), having joined the trumpet section as Principal Second at the end of January. Although I’ve done a fair bit of traveling, this is my first tour of duty with a professional orchestra, and one I’ve been looking forward to for quite some time….

Today the plan consists of trying to put my life in a suitcase, and to work out how many shirts and black socks I really need to make it through the next few weeks without seriously damaging my colleagues’ smell receptors, appetites or indeed friendships!

We have 15 concerts in 13 cities across 7 countries leaving tomorrow and getting back on the 8th of June. I have been given a lot of varying advice from people in the band about how to survive, with the most useful being the following: Eat any chance you get; and don’t blow all your subsistence on one poker game! I’m not promising anything, but shall try and keep you guys updated as our travels continue….

As a nice relaxed precursor to the tour, yesterday the orchestra together with Andris Nelsons and a whole host of singers put together a concert performance of one of the longest operas in the repertoire. Wagner’s Parsifal was an epic undertaking, but (now looking back after the 6 hour show) an enjoyable and rewarding experience. Reviews are still to come in but I think it’s safe to say from the standing ovation and endless applause that it was one for the scrapbook.

Parsifal also features heavily in the repertoire on this tour, with 5 concerts featuring selected highlights from the score, plus a final concert in the hallowed hall of the Musikverein in Vienna where we will play the 3rd act in its entirety.

Combining this stunning music with the massive sonorities of Bruckner 7, the melodious Dvorak 7 and a smattering of violin concertos with star soloist Baiba Skride, we have more than enough dots to keep us out of trouble for 3 weeks. At least in the concerts anyway.

Anyway I’m off to start packing, see you in Stuttgart! 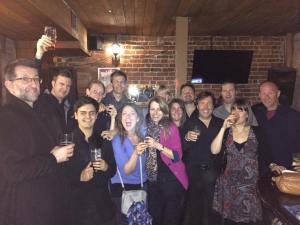 Haven’t even left yet and I’ve been pigeonholed… 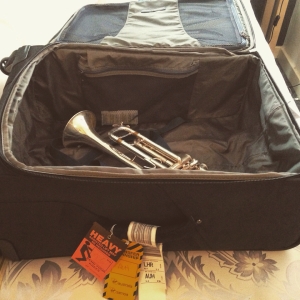 Hello again, this time from sunny Belfast. I’m back for a week for some rehearsals with the City of Belfast Youth Orchestra before we go on tour to Italy. Having played with the orchestra in my school 5 years ago, I’m now back playing as guest soloist and conducting ?! thankfully for just one piece!

The band sounds great, and playing some truly challenging music including Rachmaninoff’s second symphony and the finale from Tchaik 4. The piece I’m now conducting is a work by Wagner, Elsa’s Procession to the Cathedral from Lohengrin arranged for brass ensemble by various people including my good self. Here is a recording from the home of Wagner, Bayreuth, complete with full orchestra and choir. Great music, and a gargantuan ending! Definitely going to sound epic with we play it in a rather large basilica in Roma…

Talking of huge noise, last thursday a brass section was assembled to rival pretty much anything else on the planet (can you tell I’m excited?) to record the second Vigilante Brass video. The tune which I chose was Muse’s Knights of Cydonia (check out the original here) and I have arranged it for a slightly expanded 7 piece band including scream trumpet maestro Louis Dowdeswell and Bass Trombone god James Buckle. These guys fit perfectly with the rest of the already stellar line up.

Cy Reyolds, who single handedly engineered the recording whilst playing, is still putting the final touches on a mix, but I really can’t wait to share it with you!

Here’s a few photos from recording just to whet your appetite! 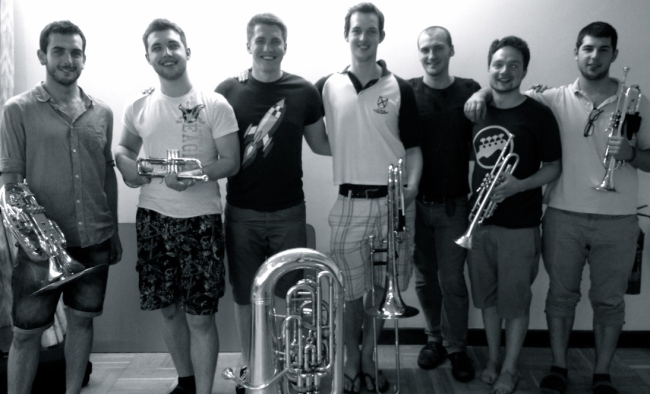 Since last blog, I’ve also had a week away in Melk, Austria with the European Brass Ensemble, working under the baton ex Berlin Philharmonic trumpet Thomas Clamor. I’ve met some fantastic people and played some great music, and can’t wait for the next tour in October. Special mention must be given to the potency of Zoltan’s Hot Sauce (not a euphemism) and to Mozart the dog.

Here is the Abbey or Stift in Melk where we played on the sunday:

and my slightly larger self (thanks to great austrian food and beer):

Finally, I’ll leave you with a bit of Jon Hopkins, master of lush synths and fat beats, who you’ve probably heard on the intro and outro of Coldplay’s Viva La Vida album. I’ve been totally addicted to the LP Insides, check it out on youtube here and buy it here!

This album has something for everyone, starting with some insanely lush strings, then dropping a horrifically filthy bass before retiring to some thoughtful and melancholy piano. Enjoy!

So here it is, my first blog post ever. Boom. Insert cymbal crash here or whatever….

I’m going to start as I mean to go on, with some great music, so have a listen to this work of beauty by Norwegian saxophonist and composer Trygve Seim. http://youtu.be/2GjmA3SkKj4

I was introduced to this by way of the featured trumpeter Arve Henriksen who I saw live in concert at the University of York a few years. Truly unique tone and a lyrical quality generally unheard of are just a few of his talents. anyway, enjoy!

I am writing this three days after graduating from my Master’s course at the Royal Academy of Music, having finally left the realms of studenthood and beginning to finally feel grown up!

Its been a great last few weeks, with academy stuff winding and a pet project finally getting off the ground. We finished in style (and huge sound) with Symphonic Brass playing at the graduation ceremony, covering everything from medieval arrangements by Elgar Howarth to the most ridiculous arrangement of Bolero for 16 brass, percussion and organ. Here are some of the trumpets on the day!

In contrast to the epic finale of academy life, I’ve finally got together the first instalment of what hopefully will be one of my major projects from now on.

As a brass player and arranger, and as a massive fan of rock and pretty much all other music, I’ve always wanted to combine the two sides of my musical psyche into a project.

Vigilante Brass is the name I’ve chosen to publish this work under, combining the soundworld and tradition of the brass quintet with a rock drumkit, and arrangements that hopefully showcase the supreme skill of some of my colleagues with some hard hitting epic themes.

The first video is a cover of a Biffy Clyro tune from their new album Opposites, and is a bit of a slow burning ballad. We had a lot of fun recording and videoing this and i’m really chuffed with how things have turned out! Also have learnt a lot, so the next one should be even better! Still not sure what tune is next but my brain is full of the possibilities…

Anyway I’ll leave this here and get on with some practice. Till next time amigos…